I'm in love. Her name is Gertie. 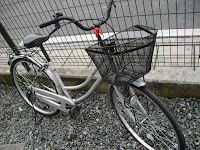 I was given a bike when I moved to Japan. It's a hand-me-down that goes from teacher to teacher and was purchased by my real-life friend H when she taught in Shizuoka years ago. As you can see from the picture above, she is terribly cute. It's totally the basket...the equivalent of putting a ribbon on a baby's single tuffet of hair. Unnecessary but helps round out the look.

I couldn't use her at first. Goodness knows I tried. The bike lock wouldn't snap open and I tried muscles I didn't know I had. Many people tried...and failed.

My new colleague speaks Japanese fluently. She was provided with the alternative hand-me-down bike that is bright pink and has a functional lock. Seeing her ride to school when I walk drove me crazy with jealousy. Especially as we live in the same building and she could leave later for work than I did. I also got rained on longer. It's not pleasant. However, this new colleague decided to take the bike to the bike shop and get my lock replaced. For eighteen bucks, I am now able to ride to school...like I did when I was in year 8. It's been THAT long. Half my lifetime ago.
Here's the tweet that graced my first ride on Gertie -

I am what I like to consider 'spatially challenged'. I can fall over nothing. I fall over often. I once believed that I may have a vision problem and while I do have glasses now, the diagnosis has no link to my struggle to keep upright. And that fall I speak of in the tweet? It was in front of witnesses, many witnesses. I am officially that 'crazy foreigner' that every town seems to have.
Since having Gertie for the past few days I have fallen back in love with bike riding...despite the constant abrasions I seem to be earning. I was grinning like a loon the first few times, enjoying the wind in my hair and the slippery whirring sound of the tyres running over bitumen. It is such a simple pleasure and I am so glad I have re-discovered it.
However...despite the layering I have on my hide, the seat hurts. You'd think there would be a benefit of being not skinny but no, I apparently still have a bony arse. Sigh. Or perhaps the seat is too high or something? Being the paranoid type, I am also terrified that I will get hit. There are many blind corners in the side streets of Shizuoka and I am worried driving, let alone riding a bike. And they don't wear helmets here. So I don't either. That in itself is a weird sensation as it's the law in Australia.
Regardless, I shall cherish my Gertie while I can. Just don't ask where I got that name from. I have no idea but it suits her, doesn't it?
Posted by Adele at 8:48 PM

You need one of these. Recommend.

Did you know these bikes are called ‘mamachari’, literally ‘mama’s chariots’? That’s because women ride them to shop, hence the basket at the front, they also load on their kids. It’s not that unusual to see a child in a carrier seat at the back, another in a seat behind the handlebars, groceries in the basket and then bags hanging off each handlebar! Then the mum hops on the bike and rides of home! Another reason why Japanese women are thin! (The bikes are also referred to as ‘shopping bikes’) Currently the Japanese are trying to enforce children being carried on bike to wear helmets, not sure how well that’s going. I always wore a helmet when riding in Japan, and yes I did get stared at. Then one of my Japanese friends came off her bike and ended up in hospital with concussion, she got a helmet and the rest of my Japanese friends stopped laughing at me in a helmet!

Well I just got a text message from my girl friend that she broke up with me! Bad news for me but great for you. Just go to http://www.gf4free.com/members/surferdude23/ Enjoy!

Gertie wasn't so nice to me the night I bought her! rode home from the city on her at about 3am...pothole...After the initial disappointment, she served me well =) Glad you got it working again.

Oh the bell is pretty darn cute too! =)