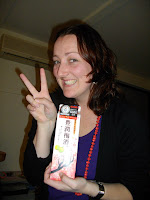 Last night I went to a parent's house for dinner. It was delicious AND we drank a lot. Pina Colada's and Apple Juice Sake (as above) were consumed, I was a newbie to both. It's made by some firm called Kirin....so obviously my colleague and I immediately started calling it 'Perkins'. It comes in a carton and can be bought at supermarkets. It was much tastier than the straight sake I tried last weekend.