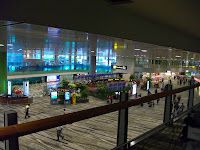 I am half way to Japan. I am currently exploring the wonders of Changi International Airport in Singapore. Flying in was wonderful as it's this weird mix of Survivor looking inlet's and gritty, junky boats. It's so green and so lush that it hits home even more how much Australia is missing sufficient rainfall.
The airport is a city unto itself. You catch skyrails between the different terminals. It's THAT big. Walking from one end of Terminal 3 (where I arrived) to the other end (checking out my departure gate) took at least 20 mins walking. Unfortunately....they changed my departure gate once I arrived there....to the one I had arrived in. That's life!
I have another four hours or so to kill so you get an uber fast post. Thanks to my new camera and it's fantastic USB/card reader...I am in love. 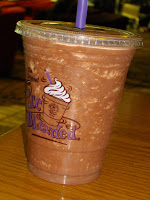 The best thing I have ever drunk in my life....Coffee Bean's Pure Double Chocolate Ice Blended. We don't have Coffee Bean's in Adelaide and I am not sure about the rest of Australia. I think I could possible pay to have it imported it was THAT good. 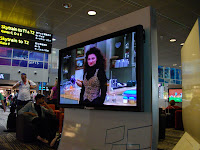 This shows that bad television can follow you anywhere. The Nanny in Singapore complete with subtitles, my whole body rankled as that horrid nasal sound emitted from a wonderfully BIG television screen.
Leopard print was never a great look. 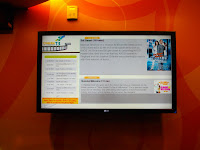 I was laughing way too much when I saw that.

The films on offer? Set Smart then Slumdog Millionaire. That's a no on both counts. Unfortunately this YA book blogger didn't bring a book with her....and all airports sell are Bit Lit. 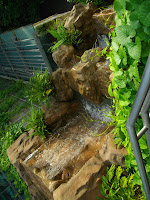 The Butterfly Zoo is a curious little corner of paradise. It's hot, sticky and kinda fantastic. I thought I took a picture of a butterfly but I must not have the hang of the new camera yet.
The waterfall was purdy though.
Maybe time to track down the mammoth koi?

Thanks to all those people that took the time to post comments...me love you heaps.
Lastly, I was waiting at the Information Booth for my wireless password and there was this family taking their sweet time with the attendant. I was getting annoyed, twitter was waiting for me! But then I overheard what was happening. Their son had finished Harry Potter and the Chamber of Secrets on their flight and was desperate to read Harry Potter and the Prisoner of Azkaban but they couldn't find it in any of the bookstores in Terminal 3. What happened? The attendant rang several bookstores in other terminals until she found a store with a copy and the family took the rail to go and pick a copy up. Now that's customer service and this chickie has no problem waiting!
Reading is alive and well...just not with me. Airport bookstores need to have a vampire intervention.
Posted by Adele at 8:19 PM

It's really interesting to learn about airports in foreign countries. Thanks for putting up the pictures, I look forward to more picture posts. It's good to see someone anxious over getting the next Harry Potter book, and not the next *cough* vampire book. Have fun in Japan!

Are you sure they weren't also playing "Gumdog Millionaire"?

Why am I not surprised that there is an entry already? =) I love Changi airport and I had one of those coffee drinks too...we may have to start an import business when you get back!

The chocolate iced drink sounds amazing! I'll be going through Changi airport twice in the next few months so sounds like double the fun for me.

Changi airport is awesome - it has got a weird rainforest aesthetic about it - actually the whole country is like that...

Did you test out the bathrooms there? the counters are SPARKLY! best airport bathroom ever!

I am so friggin jealous of you in Japan...I'm hoping to get there Jan 2011 and hit the ski slopes as well as tokyo and the outback villages! x

I have to say, Get Smart is pretty funny...!