Look...I didn't think it would happen but I've met someone.

He's perfect for me. He makes me look petite. He lets me dominate the conversation as he's the strong, silent type. He's bright and bubbly. Kids love him. He's just perfection really.

Here's me and my new man. 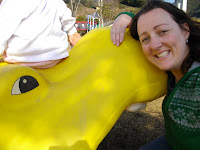 On a slightly more serous note, I've conquered a fear. Some of you have called me courageous for moving to a country where I don't know the language, working at a school I was unfamiliar with when I had never travelled before. This is patently untrue.

Courage is picking up a frog.

Courage is taking a photo with said frog.

The only thing worse than a frog would be a) a rat or b) a snake.

Kermit is pretty cute though. 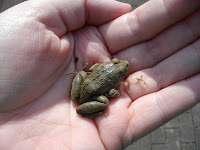 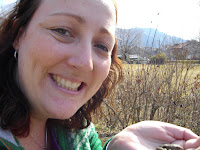 Have a good day.
Notice the smile isn't entirely genuine...and also not a great angle :)
Posted by Adele at 6:19 AM

You look so uncomfortable in that last picture- kudos for facing your fears!

I don't mind frogs, and he's quite cute. Well done for conquering a fear, though. :)

God, that smile is hilarious, you look like you want to scream and throw the frog, somewhere, anywhere!, you can see the fear in your eyes

Ohhhh! I love Boris and the frog!!