Last night was my first official outing in Shizuoka. Several of the student's mothers invited myself and two of my colleagues out for dinner and drinking. Drinking being the operative reason. Yes, these Japanese mums can hold their alcohol. The speed in which they were putting away the drinks put me to shame (and I captained the St. Marks College winning skolling teams (1999-2003).
I had a great time and met some lovely people, both parents and other Shizuokan locals. 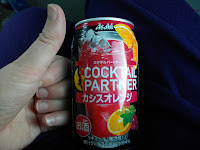 One of my co-workers handed this can to be on the bus. I love that it's called Cocktail Partner and tastes nothing like oranges. It's sweet, fizzy and was ultimately tarnished by the residue toothpaste in my mouth. Regardless, it was a help :) 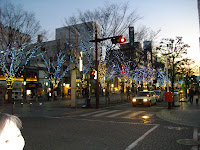 The street in which the restaurant was on in Shizuoka. There are so many trees covered in lovely lights. Of course I had to be the embarrassing tourist and whip my camera out. This was taken at 5pm, it's getting dark pretty early. 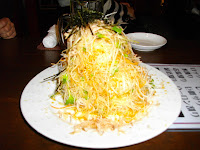 I don't know what this was but it was tasty. It was the first dish of the banquet at Asian King and then heaps more came. Needless to say I got distracted by the yummy food and neglected my camera. 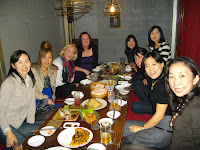 Check the beehive! I think it's more fabulous close up and I got her to promise to do it to my hair.

I have been mocking my students for their automatic peace fingers every time a camera surfaces. It only took me less than three weeks to break. 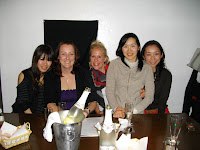 Later that night at the pub, Our Boozer (yes that's it's real name). I shared a bottle of Cafe de Paris (a sparkling, sickeningly sweet white) with a fellow teacher. It was 3500 yen ($35) which is ridiculous as it was probably only worth 1500 yen ($15) if that. It went down a treat though.
At the end of the night, another teacher and I found ourselves at one of the mum's houses eating marinated carrot/squid and another octopus dish. We meet the whole family including the masseuse Grandmother, drank sake (not a fan) and talked about how European cheese was better than Asian cheese. Mind you, this was at 2am!
The funniest part of the night...I have used chopsticks a grand total of three times before coming here. I was in this family's lovely house using chopsticks, fairly well considering, and the Japanese speaking grandmother shuffled off and came back silently placing a fork next to my dish. I swallowed down the giggles.
The people here are so delightful. So lovely. I am very fortunate.
Posted by Adele at 5:37 PM

Sounds like you had an absolutely fabulous time! I can't help but wonder how they would have dealt with me given that I don't drink alcohol and couldn't have eaten any of the food.
They sound so nice, though! And yes, so funny the chopstick/fork story! :-P